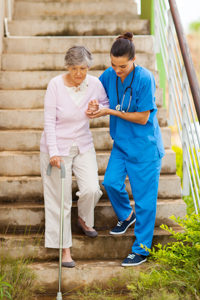 The leading cause of a neurological impairment in the world is cerebrovascular accident (CVA) or ‘stroke’. With aging of population in the United States and worldwide the risk of CVA is increasing. There are many conditions that can also be similar to a CVA in effect including, for example, arterio-venous malformations (AVM).

A CVA will influence dysfunction in the brain usually affecting one side or hemisphere of the brain. When the right or left hemisphere of the brain is affected it may cause a loss of motor function on the opposite side of the body. This may cause difficulty with weight bearing on the affected side. It may also cause a visual field loss or a spatial neglect on the affected side. A CVA in the left hemisphere may also cause difficulty with recognizing letters, numbers and words that are called a receptive aphasia as well as difficulty speaking which is termed an expressive aphasia.

When a CVA occurs the spatial visual process will be compromised affecting the balance in organizing support from the visual process for posture, balance and movement causing vision problems. Following a cerebrovascular accident (CVA), individuals initially tend to lean toward the side of the hemiparesis Paresis of one side of the body). The brain will attempt to compensate for this weight shift by shifting the visual midline away from the affected side. This is termed a Visual Midline Shift Syndrome (VMSS). When the visual midline shifts the effect is to weight shift away from the affected side. Rehabilitation following a CVA requires extensive physical and occupational therapy in an attempt to facilitate proprioceptive and spatial awareness on the affected side, through weight bearing, to improve posture and balance.

Often patient in therapy will improve only to a certain level and then “plateau” or not make and additional progress. This is because the visual midline will often not reset. The patient will be often discharged by the rehabilitation center because of lack of further progress.

If the visual midline remains compromised the progress will often “plateau”.

Research performed by Dr. Padula and colleagues have proven that through a careful assessment of the spatial visual process and evaluation of posture and balance, yoked prisms can be prescribed which will affect postural alignment and increase weight bearing on the affected side. If the yoked prisms are prescribed while the patient is still in therapy often the condition of progress will advance well beyond the level of “plateauing” occurring without the prisms. For patients who have been discharged posture yoked prisms (PYP) can still rehabilitate balance and movement even years after all therapy has been stopped. The use of PYP varies depending upon the condition of the patient presented. In some cases the PYP can re eliminated and in other cases the prisms may be needed as maintenance or the PYP may be reduced in power.

The PYP are determined though a comprehensive evaluation of vision as well as a neuro-visual postural evaluation with PYP that are specifically designed and prescribed to affect the lateral and/or anterior-posterior shift in VMSS. Follow-up evaluations are important to monitor the progress, alter the position of the prisms and to consider Neuro-Visual Postural Therapy ™ (NVPT) if necessary and appropriate.