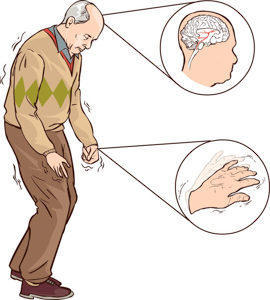 Parkinson’s disease affects nearly 1 million people in the United States. It is a slow progressive disorder of the nervous system causing dysfunction of motor organization affecting posture, balance and speech. In the early stages it often produces a tremor of the limbs and/or jaw that can increase. It is caused by degeneration of the substantia nigra. Vision can be affected also and the visual complications will reinforce characteristic difficulties with posture and balance. While visual acuity can be affected by degenerative states in the optic nerve, the primary visual dysfunction caused by Parkinson’s disease is the interference and compromise between the spatial visual process and the postural support producing an upright alignment against gravity.This dysfunction causes vision problems.

Parkinson’s disease compromises this relationship by compromising the neurological relationships received from the muscles and the joints about the body’s position upright against gravity. This is called proprioception. When proprioception is affected the brain does not receive nor does it respond to the postural cues to vertical alignment. The brain’s postural awareness is supposed to send information to the muscles when there is a heel strike during walking to produce extensor tone so that with each step and moment of contact with the surface of the ground the brain sends information to the muscles to push up or away from the ground or horizontal surface. The spatial visual process reinforces the normal postural tone in the muscles. However, in Parkinson’s disease there is a low tone produced which produces a shift in the visual midline anteriorly causing and reinforcing a state of low postural tone and flexion or leaning forward.

The characteristic common to those with Parkinson’s disease is a shuffling of their feet on the floor instead of lifting the foot for each step. This has been termed “the Parkinson’s Shuffle”. While there are neurogenic effects that cause this characteristic the shift in the visual midline is a primary reinforcer of this postural imbalance.

It has been found that the resultant condition of Visual Midline Shift Syndrome (VMSS) driving the COM and COG anterior or forward exaggerates the characteristic of shuffling the feet during walking. Yoked prisms can affect this imbalance. Yoked prisms can be designed in glasses to shift the visual midline posteriorly to a more appropriate position. This shifts the COM and the COG back to realignment. The result is that posture can be improved and many persons will begin to lift their feet with each step. The yoked prisms do not cure the underlying condition of Parkinson’s disease but can improve the quality of life as well as reduce the risk of fall.

In more severe states of Parkinson’s disease a condition of ‘visual neglect’ can develop from the mismatch of the spatial visual process and the postural base of support (BOS). A visual neglect is not a visual field loss but it characteristically can show the behavior of not being aware of either the left or the right visual field. It causes the person to give more attention to the detail in the non-affected field. This produces a shift in the visual midline toward the side of awareness in addition to the anterior VMSS. The lateral shift can increase the risk of fall and severely affect posture even in the seated position.

Yoked prisms and Neuro-Visual Postural Therapy ™ (NVPT) can be beneficial is realigning posture and reducing or eliminating the visual field neglect.