Post-trauma vision syndrome (PTVS), which is characterized by binocular function problems, may be caused by dysfunction of the ambient visual process which is part of the sensory-motor feedback loop, rather than by a specific oculomotor disturbance. Clinically, PTVS frequently presents with symptoms of diplopia, blur, seeing movement in the spatial environment, vertigo, and hallucination-like experiences. Visual evoked potentials (P100) were used to evaluate an experimental group (n = 10) of subjects who suffered a traumatic brain injury, and a control group (n = 10). A new treatment using prisms and bi-nasal occluders, which affected amplitude responses of the VEP, was evaluated. The results demonstrate that the amplitude of the VEP is a function of cortical binocular integration, and that this is influenced by dysfunction of the ambient visual process. The results also demonstrate that base-in prism and bi-nasal occluders are an effective means to treat ambient vision disturbances resulting from head trauma induced PTVS.

Visual dysfunction and symptoms of asthenopial headaches, diplopia, dizziness, inability to focus, movement of print when reading, and difficulty with tracking and fixation are common after a traumatic brain injury or whiplash. Conditions of strabismus, convergence insufficiency, divergence excess, oculomotor dysfunction, and accommodative insufficiency have also been reported in the literature for a number of years. Gianutsos et al. [I] found diplopia, reduced acuities, and poor accommodation to be prevalent among persons with traumatic brain injury. Cinotti and Stephens [2] reported diplopia present in certain positions of gaze. Soden and Cohen [3] have correlated anomalous body posture with compensation for the diplopia produced in certain positions of gaze. In addition these researchers found secondary contracture and/or muscle spasms due to poor body posture.

A high prevalence of exotropia and exophoria have been reported for persons who have suffered a traumatic brain injury (TBI) [4-9]. Up to now visual dysfunction has been attributed in part to nerve palsy. However, the majority of visual problems, as well as symptoms, have not been explained by CT scans or MRI testing.

Visual evoked potentials (VEP) have been used to analyze afferent pathway involvements that affect visual field and acuities. VEP testing is traditionally performed monocularly, and can be in a flash mode or pattern-reversal test. The latter is considered more sensitive in the detection of minimal visual pathway lesions [10, 11]. It is reported by Rizzo et al. [12] that VEP evaluation is a useful non-invasive technique to determine organic dysfunction of the central nervous system in some subjects. Evoked potentials have also been used successfully to predict survival rates among severely injured subjects [13].

Research in visual processing has shown that the occipital cortex does not solely represent the visual system. Trevarthen [14] and Liebowitz and Post [15] describe at least two separate visual processes: the focal process concerned primarily with detail discrimination and the ambient process which relates to spatial orientation, movement detection, and balance. The ambient system comprises up to 20% of the nerves emanating from both eyes and these are directed to link up with midbrain and even brainstem prior to the occipital cortex. Thus the ambient process becomes part of the sensory-motor feedback loop with the kinesthetic, proprioceptive, tactual, and vestibular systems, and acts as a feed-forward system.

The extrageniculate visual system underlies the ambient process for processing peripheral vision. Midbrain superior colliculus has a number of functions for the visual system. It is important to the process of foveation (aligning the foveas for discriminating objects). It also has a more primitive and general role in stabilizing the organism’s visual world. Pretectum in midbrain has an important function in developing binocular convergence [16].

Visual skills included tracking and convergence. For these tests subjects were asked to follow a 5 cm silver steel ball supported by a black rod. Tracking was recorded as smooth, jerky, or fixation loss. As the silver ball was moved towards the subject, convergence ability was recorded at the point of reported diplopia or loss of ocular alignment. Recovery was the point at which the subject reported single vision or when ocular alignment was noted.

A cover test at distance and near was used to elicit phorias with compensating prism used to neutralize the deviation. The silver ball was used at near for a fixation target and the letter chart at a 3 meter distance was used as the distance target.

Direct and indirect ophthalmoscopy was performed on each patient to evaluate the media of each eye as well as the integrity of the optic nerves, macula, and peripheral fundi.

Upon completing the visual evaluation, VEPs were performed using a Nicolet Compact Four Electrodiagnostic System and a NIC 1015 Visual Stimulator. Full field binocular stimulation was performed utilizing checkerboard-pattern reversal stimulation with a check size of 30′ and a stimulus rate of 1 – 9/s. The electrode montage was as follows: Oz (positive), Fpz (negative), and Cz (common). Electrode impedance was maintained below 5 kQ and within 3 kQ of each other.

Table 7 is a representation of the VEP (Nl-Pl) findings for both groups. The initial column shows that the VEP was taken binocularly with the refractive correction in place and then with base-in prisms and bi-nasal occluders as is represented in column two.

Figure 1 is a representative pattern reversal – VEP (binocular). This subject showed an increase in the amplitude (N 1 -P 1) when base-in prisms and bi-nasal occluders were introduced before both eyes.

After a TBI the prevalence of visual dysfunction is high [17]. Traditionally, vision problems post-TBI have been classified or diagnosed according to the oculomotor difficulty such as, exotropial third nerve palsy, convergence insufficiency and accommodative insufficiency. While these diagnoses help in understanding the ocular dysfunction they often do not support understanding the greater visual problems and symptoms that the person with a TBI may present. These diagnoses are specific, and do not take into account the complex relationships between the visual process and the sensory-motor systems.

The results of this study suggest that many persons who have suffered a TBI do have significant visual problems which cause a reduction in acuity, binocular dysfunction and accommodative dysfunction, as well as oculomotor dysfunction. However, the study indicates that the symptoms presented may be due to a disturbance of the ambient visual process, which in turn interferes with binocularity. The VEP of the experimental group showed a statistically significant increase in the amplitude when base-in prisms and bi-nasal occluders were introduced before both eyes. This indicates that the binocular cortical cells had to some extent been compromised. These binocular cortical cells function primarily as part of the focal process. Post-TBI there appears to be an interference in spatially organizing the visual field which in turn affects focalization [ 18]. Thus, the amplitude will reduce when tested binocularly on a VEP because the focal process has been compromised. The focal process of the visual system relates to attention and concentration, and thus cognitive functioning. Any interference with the focal process will affect binocularity, accommodation, convergence and oculomotor function.

The increase in amplitude of the binocular VEP for the experimental group when using base-in prisms and bi-nasal occluders suggests that by affecting the ambient visual process through structure from the bi-nasal occluders and field expansion from the base-in prisms, the binocular cortical cells increase in effectiveness of function. This increase in binocular cortical function is also correlated with the verbal responses from the subjects. Frequently, the subjects reported that the perceived movement of the letters on the chart or of the floor stabilized. They also reported that it was easier to fixate with two eyes and, for some, the diplopia was eliminated.

This study further indicates that the ocular conditions diagnosed after a TBI may be due to a dysfunction of the ambient visual process in its ability to organize spatial information with other sensory-motor systems. This in turn causes a compromise of the focal process.

This disturbance in the ambient system appears to cause the dysfunction of binocularity for the persons in this study and, for many affected persons, may actually lead to strabismus, convergence insufficiency, accommodative insufficiency and oculomotor dysfunction. Thus, it is suggested that, following a TBI, ambient processing dysfunction may be the cause of what the authors have termed post-trauma vision syndrome (PTVS). Understood in this way, the specific binocular dysfunctions are actually characteristic of PTVS (see Table 9).

While the present study does demonstrate that VEP amplitude changes are possible post-TBI by affecting the ambient visual process, there is a need for a more extensive study with an increased number of subjects. Also, specific analysis of bi-nasal occluders separate from base-in prisms is needed, to determine if one of these regimens is more effective than the other.

Fig. 1-a Visual evoked potentials with no correction. 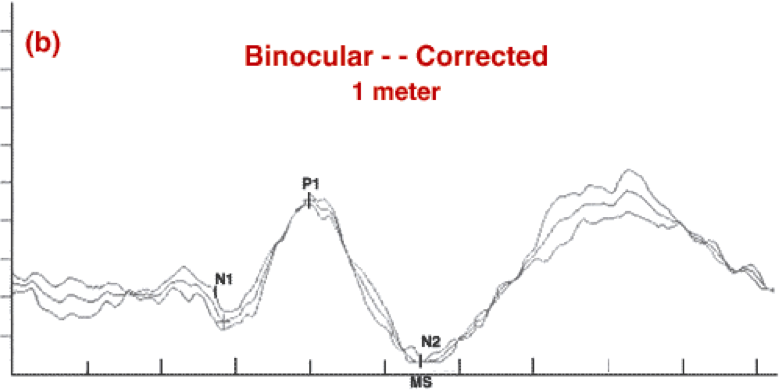