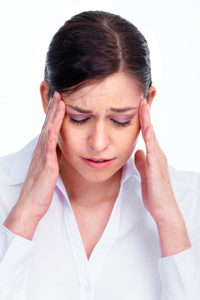 The incidence of mild traumatic brain injury (mTBI) is increasing in the United States with an estimated 3.8 million sports-related mild traumatic brain injuries (mTBI) annually in the United States reported by The Centers for Disease Control and Prevention (1). Concussion, a mild form of TBI, remains highly underreported. Common signs and symptoms of a concussion include headache, nausea, confusion, dizziness, blurred vision, diplopia, and photophobia (2).

Following a TBI, persons often report visual symptoms, such as visual fatigue, eye strain, intermittent blurred vision and headaches. These are commonly recognized as signs of difficulty with the eyes.
However, people who have had a TBI can experience other symptoms that are unrelated to structural problems in the eyes and optic nerve, and actually arise from trouble with the visual process. These may include: difficulty with balance, dizziness, vertigo, photophobia (glare sensitivity), double vision, seeing print appear to move when reading, difficulty functioning in crowded, busy environments, panic attacks and visual hallucinations.
The visual problems that persons with TBI are often overlooked and symptoms are attributed to other problems. Unfortunately, when those other perceived problems are treated, they usually fail to stop the visual symptoms.

Vision is a dynamic, interactive process of motor and sensory functions. Our brains use our eyes to help organize and control the movement of our bodies and to stabilize what we see around us – this is called the visual process. When it is out of balance, it interferes with all aspects of performance, including cognitive perception.

A common misunderstanding is that “seeing” (perceiving something with our eyes) delivers information to the brain much like a computer. Seeing is much more complex. It is related to movement, posture and our motor system in general. Because our brains usually coordinate these functions so rapidly and so well, most people take the entire process for granted. Only recently have we begun to learn more about how vision, movement, and perception are connected.
We have two kinds of vision. The focal process carries images through the central part of the eye and helps us see details. It also enables “fixation” – the ability to look directly at something – and supports attention and concentration. However, the focal process only delivers information on an object to the brain if the eye is directly fixed on it.

The other kind of vision is the ambient process. The ambient process delivers information to the brain from the peripheral retina. Peripheral vision (what we see in the ‘margins’ of our vision instead of what is directly ahead) affects our awareness of where we are in space and where things are around us. This part of our vision is very important to the body’s motor system. It also serves to organize our focal process by spatially orienting us before we look at details. The ambient visual process must work in conjunction with the focal visual process for effective vision.

The symptom of blurred vision is caused by a brain dysfunction. The concussion can affect the balance in two visual processing centers in the brain and cause a condition called Post Trauma Vision Syndrome (PTVS).

In any neurological condition, such as with traumatic brain injury, cerebrovascular accidents, and multiple sclerosis, imbalance can occur between the ambient and focal visual process. Research using visual evoked potentials (brainwave tests) has documented this dysfunction, which is called Post Trauma Vision Syndrome (PTVS). In my experience, PTVS is common in TBI.

In PTVS, the ambient visual process loses its ability to organize information spatially. When that process is affected the person becomes “focally bound” or overly fixated on visual details, and has to work harder to use his/her vision. The extreme effort and intensity required to use the focal visual process leads to visual fatigue, headaches and eyestrain.

PTVS can also cause individuals to visually fixate on individual letters instead of words when reading, and to have difficulty “releasing” or moving their vision away from letters and words. This causes words to appear to jump and move about the page as the person attempts to read. It can also cause the intermittent blurring and even double vision (diplopia) that some individuals experience.
Some persons with PTVS also find it more difficult to function in busy, crowded environments, such as supermarkets or shopping malls. They identify people walking around in the peripheral vision as detail and that becomes confusing. In some cases, persons with severe dysfunction of the focal and ambient visual process will become anxious or even develop panic attack syndrome, due to the way that their visual world is being re-ordered.

The concussion can affect both posture and balance. This is called Visual Midline Shift Syndrome (VMSS).

The ambient visual system also works with the other senses and neuromotor system to give the brain information on how the body is oriented in space. If the ambient system is dysfunctional, the person will have difficulty with movement and balance, which often happens following a TBI.

For instance, our ambient vision and motor system tell us where the midlines of our bodies (imagine an invisible line drawn down the center of your body from head to toe) are in space. Normally you know where your midline is, both front to back (anteriorly and posteriorly) and from side to side (laterally). But if either your ambient vision or your motor system is impaired, your sense of midline may be shifted from front to back or from side to side, distorting your sense of space. This has been termed Visual Midline Shift Syndrome (VMSS).

When a person has VMSS, part of the visual process causes the brain to experience the floor as being tilted. They then begin to lean and/or ‘drift’ to one side when walking due to the VMSS. The person’s posture may be distorted, affecting seated posture. They may even experience back pain or muscle rigidity (i.e. postural tone).
Simple tests can be performed to determine if a person has VMSS. By simply observing the person walk, one can frequently observe increased weight bearing on one side or the other. In addition, the person will frequently tend to drift to one side when walking. They also will sometimes bump into objects more on one side that the other.

Recent research has proven that the posture and balance can be improved by use of prescriptive yoked prism glasses that will realign the concept of visual midline.

We tend to think about our individual sensory processors (our eyes, ears, nose, tongue, mouth and fingers) as separate systems, so we have highly specialized professions to treat each of them. Optometry and ophthalmology provide care of sight and the eyes, audiology for hearing and specialist in olfaction for smell. We usually get effective treatment for a specific sensory organ, but this specialized approach is not effective in dealing with problems that involve both the sensory and motor systems.

Persons with a TBI who have visual dysfunction can benefit from a neuro-visual rehabilitation evaluation. This exam is very different from a routine eye exam. Its purpose is to analyze in depth the relationship between the ambient visual process and the neuro-motor system using a variety of tests.

After a comprehensive evaluation is made, prescriptions can be given for various types of lenses and glasses that can counter the effect of VMSS. Frequently, the doctor will prescribe specially designed “yoked-prism” glasses that shift the visual midline affecting balance and posture.

A prism is a wedge of glass or plastic that produces an optical effect. When you look through the prism at an object, it will appear to be shifted in position toward the apex or thin part of the prism. Prisms accomplish this effect by expanding or compressing part of the visual field. It is the compression and expansion of the prism that when properly prescribed can effectively treat PTVS and VMSS.

In some cases, glasses can dramatically improve posture and balance. The person will shift his/her weight in the necessary direction and will have better balance. If the midline shift is to one side, yoked prisms can be used to shift the midline and prevent leaning and reduce risk of falls.

Yoked-prism glasses are usually prescribed for therapeutic use in short time intervals each day and should only be used under the direction of the prescribing doctor. The doctor may also recommend using these prisms during physical or occupational therapy.
Another therapeutic aid that can be employed is binasal occlusion. This involves placing two strips of opaque vertical tape on the part of each lens that is closest to the nose. The ambient visual system does not see detail, but instead organizes space and orients to vertical lines and boundaries in the visual environment. The binasal occlusion provides a new vertical boundary to which the malfunctioning visual process can anchor itself.

Symptoms of PTVS include:

Symptoms of VMSS include:

Prisms and binasal occlusion can also be used to treat PTVS by reducing symptoms and enhancing visual performance. Individuals with PTVS experience compression in the peripheral vision, and these tools can help counter that effect by reducing the central field of vision and expanding the periphery. This reduction of stress in the visual system frequently improved attention, concentration, memory and cognitive function.

Treatment is available as described above, through use of lenses, prisms and therapy that can reduce the symptoms that are being caused by the PTVS and VMSS and improve the individual’s functioning.

It must be recognized that treating PTVS and VMSS are often part of the problem affecting balance, posture, attention, concentration, etc. following a TBI. However, for many the dysfunction of the visual process can be a primary cause of the symptoms that are experienced. The treatment through neuro-optometric rehabilitation becomes an interdisciplinary approach that can maximize potentials in other therapies as well such as physical, occupation, speech and cognitive therapies.