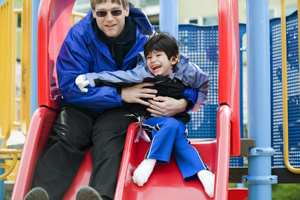 Seventeen million persons are affected by cerebral palsy. The condition of cerebral palsy can be caused by damage to different areas of the brain. It can cause spasticity (stiffness of the muscles) in some affected by the frontal lobe of the brain. The condition of ataxia (shaky motor coordination) is caused by dysfunction in the cerebellum. Persons with this condition often have difficulty coordinating balance. Dyskinetic movements are uncontrollable movement and this dysfunction arises from problems in the basal ganglia

Vision is often affected since cerebral begins in the early development. However, vision dysfunction can be interference in binocularity or teaming of the eyes or it can affect processing of vision related to balance and posture as well as coordination of visual skills such as tracking, fixations and/or saccades (quick eye movements). The visual difficulties arise because two processes are critical for organization in early childhood. These two processes are the process of attention and concentration (focal process) and the other is a spatial visual process that is important to coordination and postural alignment upright against gravity. The spatial process is very important in early development of the child and serves as a support for organizing the visual skills. The compromise to the spatial visual process from cerebral palsy interferes with the continued developmental process that vision plays a very important role in supporting.

When the spatial visual process is compromised early in development it can affect the organization of establishing visual midline to support postural alignment upright against gravity. It can produce shifts in the visual midline reinforcing imbalance and postural mal-adaptations in addition to difficulties with binocularity. This can cause vision problems.

Evaluation of the visual process should determine the health of the eyes as well as visual acuity and visual field. In addition, further evaluation is important of the spatial visual process and it’s organization with the proprioceptive base of support (BOS). When there is mismatch between theses systems yoked prisms can be prescribed that will realign the visual midline affecting the center of mass. The affect of the prisms can be to improve posture as well as to affect binocularity and visual skills. Therapy (Neuro-Visual Postural Therapy ™ – NVPT) can be affective in assisting the children improve in visual processing affecting posture and movement.